On November 13, 1974, the peace in the tiny Long Island town of Amityville, New York, an upper-middle-income community of 10,000, was shattered when 23 year-old Ronald DeFeo returned from a night of drinking and shot every member of his entire family.

Ron, Jr. and the DeFeo Family

Ronald, Sr. and Louise DeFeo lived with their five children at 112 Ocean Avenue in Amityville, New York. Although the DeFeo family was generally known as a “nice, normal” family with more money than anyone else on their street, the eldest son, Ron, Jr. was often in trouble with the law. He was known around town as a troublemaker of the worst variety. An admitted drug user, a petty criminal and a heavy drinker, Ron, Jr. also harbored a mile-long meanness streak.

Many of Ron’s acquaintances often stated that people “had trouble getting along with Ronnie. Most of Ron’s co-workers at Brigante-Karl Buick dealership at 800 Coney Island Avenue, always said “please” and “thank you” to Ron, just to avoid any conflicts with the highly volatile service manager. Although he was “not known as a very good fighter” he seemed to have a knack for finding himself on the business end of other bargoers’ fists.{googleads}

November 13, 1974
On the night of November 13, 1974 Ron, Jr. told some friends whom he’d met at a local pub called Henry’s (on the corner of Merrick Rd. and Ocean Avenue) that he had encountered a horrible murder scene at his house. Many of the local bar patrons proceeded to the DeFeo house and were shocked at what they found.

Ron’s friends immediately called the Amityville police, who in turn phoned the Suffolk County Police Department’s homicide squad. Upon their arrival at the large, three story place with a newly installed heated swimming pool and a boat dock on a nearby neighborhood lake, the police discovered the bloodied, pajama-clad bodies of five members of the DeFeo family. Shot to death with a .35 caliber Marlin rifle were Ronald Sr., 43; his mother, Louise, 42; his sisters, Dawn, 18, and Alison, 13, and his brothers, Mark, 12, and John Matthew, 7. Apparently Ron, Jr. slowly and defiantly crept from room to room murdering his family members one by one. He killed all six with just eight bullets.

Chief Patrick Mellon, the Suffolk Chief of Detectives, who headed the investigation, which involved both the Suffolk County Police and the Amityville Village Police, said that Mr. and Mrs. DeFeo had both been shot twice in the backs of their heads. The four children, he said, were shot once each in the middle of the back. The chief said there were no signs of a struggle. 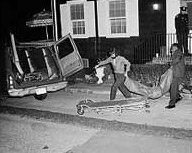 The following is a reconstruction of the circumstances of the murders from accounts provided by Chief Mellon, others in the Suffolk Police Department and neighbors in that section of Amityville.

John Wendel, a bartender at Henry’s, just down the street from the DeFeo house, said that Ron had come in three separate times on that day. Ron told police that he went home at 6:38 pm and discovered the grisly crime scene. He immediately got in his car and drove to Henry’s where he ran into the bar yelling “my father and mother have been shot!” Several patrons drove to the home where they saw the bodies of the four children and dialed the Police Department. The police arrived on the scene by 7 pm and found the bodies of Ron, Sr. and Mrs. DeFeo in addition to those of the four children. View the Amityville House death scene photos here but but forewarned, they are quite graphic.

The next day, following a press conference, an overall clad Ron, Jr was escorted in handcuffs to a nearby police car. Despite claims that he had heard mystical voices telling him to kill his family, Ronald DeFeo, Jr. was convicted in 1975 and was sentenced to six consecutive 25-year prison terms.

But of course that would not be the end of the story.

In late December of 1975, just barely one year removed from the grisly events, George and Kathy Lutz bought the 4,000 square foot DeFeo house for a reasonable sum of $800,000. Although the Lutz’ never once called the Amityville police to report any suspicious happenings, they quickly fled the house without their belongings after a mere 28 days. They claimed that “evil forces” haunted their Long Island home. A subsequent book and movie would eventually sensationalize the Lutz’ quick departure, spurring ghost hunters and novelty seekers from around the world to descend upon the sleepy hamlet.

The Blessing of the House
Shortly after purchasing the home, it was recommended by a friend that due to its recent history, the family should have the house blessed by a priest. Enter Father Pecararo the vice-officialis of the dioscian office who performed a blessing even before the Lutz’ had finished unpacking. During the blessing, Father Pecararo mentioned that one particular room “bothered” him so he recommended that the family not use this particular room as a bedroom. So the Lutz’ agreed to use the room as a sewing room (remember this fact for later). Father Pecararo couldn’t completely explain the feeling, but he just repeated that it made him “uncomfortable.” As the story of the Lutz’ would eventually become public, Father Pecararo’s reputation would undergo irreparable damage from which he would never recover.

Strange Occurrences
While moving into their new home, a mysterious string of mishaps rocked the Lutz family to its core. One day while they were unpacking, the Lutz family dog, which was tied up in the backyard, jumped the fence in an escape attempt but ended up hanging himself. “Harry” was eventually rescued before he strangled to death.

As the Lutz’ eventually got moved into their new digs, the house began to spill its horrid history before the family’s eyes. Strong putrid odors emanated throughout the home, green slime oozed through the walls and the toilets turned black. Large swarms of houseflies continued to pile up in the sewing room. Drops of mysterious black goo leaked through keyholes throughout the house. Footsteps were quite often heard walking throughout the house. Household appliances turned themselves on and off randomly and doors would strangely slam shut even though, upon further investigation they were locked and never appeared to have been opened in the first place.

The entire family noticed severe mood swings and personality changes amongst themselves. George found himself continually awakening at 3:15 in the morning with an uncontrollable urge to check the boathouse. But of course nothing was ever discovered. He often felt sick, would go days without bathing, and he lost quite a bit of weight. Kathy experienced nightmares and the children fought amongst themselves more than is common with the usual sibling disagreements. These strange occurrences weren’t limited to the Lutz family however. Even neighbors or visiting friends were subjected to the house’s antics. During gatherings, visitors could hear bumps and bangs and they even heard the footsteps walking on the floor above their heads. 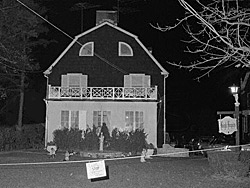 The Lutz’ were persuaded to recite The Lord’s Prayer while walking throughout the house in hopes of frightening the spirits away, but to no avail. During one particular recitation, a mysterious voice shouted, “will you please stop!” (That seems a little polite but hey, perhaps even evil spirits have good manners!)

With their patience nearing its end, the family began to unravel when strange apparitions made their appearance. Kathy continually felt like she was being watched. Shadows moved around the house and they would see eyes peering in at them from other rooms. The youngest Lutz child found a way to deal with her personal terror. She developed an imaginary friend named “Jodie”. Four year-old Missy claimed Jodie was her angel.

Taking Action
George and Kathy decided to take action. They began throwing objects at the eyes that peered at them from other rooms in the house. Kathy once hurled a chair at a pair of eyes that was looking at her from one of the bedrooms. The sound of a squealing pig was the only result. The Lutz’ could no longer endure the terror.

Abandon Ship! Abandon Ship!
The family had finally come to the point where they could no longer stand the restlessness. They decided to go to Kathy’s mother’s house to give them some time to sort things out and to decide what they wanted to do. In their haste to leave the house, they left clothes strewn about. They left food in the refrigerator and many belongings simply lay where they were left. It was eventually decided that they would leave the house. Just leave it and never come back.

As George was completing his packing, he noticed that the ambient temperature inside the house fluctuated rapidly from cold to hot. As he ran from the house, the walls began to move back and forth, moaning and groaning as if they were expelling a lodged chunk of meat. One final event convinced George Lutz that he would never return to the house at 112 Ocean Avenue. As George was running down the stairs, an apparition (or ghost, if you will) appeared on the stairway’s second floor landing. It slowly raised an arm and pointed at him.

Today George Lutz has a set of photographs that were taken at the Amityville house. One photo (taken by investigators) shows a shadowy apparition (or ghost, if you will) of a young boy standing on the second floor landing.

The house would later become entangled in the Amityville horror imbroglio which was featured in the Hollywood movie, The Amityville Horror.

kitten natividad obituary and How did Kitten Natividad Die?

Disadvantages of Being a Freemason