What is Andrew Cuomo net worth?

Andrew Cuomo is an American politician who has a net worth of $5 million. Andrew Cuomo is best known for serving as the 56th Governor of New York. He assumed office on January 1, 2011. He announced his resignation in August 2021 amid a sexual harassment scandal. Andrew is the son of the late former three-term Governor of New York Mario Cuomo and the brother of CNN correspondent Chris Cuomo.

Back in 2010, when he was NY’s Attorney General, Andrew released his first detailed report of his personal wealth. According to that report Andrew made $1 million per year in 2004 and 2005 while he worked as an advisor to real estate tycoon Andrew Farkas. His 2013 financial disclosure reported a net worth range of at least $1.75 million to as much as $3 million. His 2015 disclosure showed $650,000 in book royalties from his memoir. In 2020 he was paid $5 million for a book about leadership during the time of the COVID crisis. He reportedly received a $3 million advance and expects to receive an additional $2 million over time.

Andrew Mark Cuomo was born in the New York City borough of Queens, New York on December 6, 1957, to Mario Cuomo, an attorney who later became a three-term Governor of New York and Matilda Cuomo. Mario Cuomo’s parents, Andrea and Immacolata Cuomo, both emigrated to the United States from Italy. Andrea emigrated in 1926 and Immacolata immigrated in 1927. His brother Chris is a correspondent for CNN. His sister Maria Cuomo Cole is a  producer of films with social impact at Cuomo Cole Productions and is married to fashion designer Kenneth Cole. His other sister Margaret is a doctor. The Cuomos are of Italian descent. Andrew’s paternal grandparents were from Southern Italy and his maternal grandparents were from Sicily. Andrew graduated from St. Gerard Majella’s Schol in 1971 and Archbishop Molloy High School in 1975. He received his B.A. from Fordham University in 1979 and his J.D. from Albany Law School in 1982.

Andrew Cuomo was his father’s campaign manager during his 1982 campaign for Governor of New York. Once Mario Cuomo was elected, Andrew joined his father’s staff as a policy advisor for a salary of $1 per year. Andrew Cuomo was an Assistant District Attorney for New York from 1984 to 1985. He also worked briefly at the law firm of Blutrich, Falcone & Miller. He founded Housing Enterprise for the Less Privileged (HELP) in 1986 and left his law firm to run HELP full-time in 1988. From 1990 to 1993, Cuomo was chair of the New York City Homeless Commission, which was charged with developing policies to address the homeless issue in the city and developing more housing options.

When Hillary Clinton became President Obama’s choice for U.S. secretary of state, then-New York governor David Paterson was charged with appointing a temporary replacement until a special election. Cuomo was seen as a leading contender for this appointment. On January 23, 2009, Paterson announced he would appoint Kristen Gillibrand to the U.S. Senate.

Cuomo was the Democratic nomination for Governor and defeated Republican Carl Paladino in 2010. He was re-elected to a second term in 2014. In 2018, In the 2018 gubernatorial election, Cuomo was challenged in the primary from the left by Sex and the City actress-and-activist Cynthia Nixon. Cuomo defeated Nixon, 65.53%-34.47%. In November 2018, Governor Cuomo was re-elected with the largest number of votes of any governor in both the primary and the general elections, defeating Republican challenger Marc Molinaro by a margin of 59.6%-36.2%.

During his governorship, Cuomo oversaw the passage of a law legalizing same-sex marriage in New York; creation of the United States Climate Alliance, a group of states committed to fighting climate change by following the terms of the Paris Climate Accords; the passage of the strictest gun control law in the U.S.; Medicaid Expansion; a new tax code that raised taxes for the wealthy and lowered taxes for the middle class; a $15 minimum wage, the strongest paid family leave program in the nation; wage equality; and legislation legalizing medical marijuana. Cuomo introduced the Excelsior Scholarship in the 2018 budget,  a provision that families making less than $125,000 in 2019 could have free tuition at all SUNY and CUNY universities.

In 2003 Andrew wrote a book titled “Crossroads: The Future of American Politics” . In 2014 he wrote “All Things Possible: Setbacks and Success in Politics and Life”. It was later reported that this book sold fewer than 4,000 hardcover copies.

In October 2020 Andrew released a book titled “American Crisis: Leadership Lessons from the COVID-19 Pandemic”. In March 2021, The New York Times reported that Cuomo had been seeking a $4 million advance for the rights to the book, which was eventually acquired by Crown Publishing Group. When asked for comment by the Times, Crown would not confirm or deny that the advance was slightly more than $4 million as their sources indicated. The Times article further alleged that Cuomo used his staff to assist with the book which apparently has sold fewer than 50,000 hardcover copies.

Tax records would later show that Andrew will earn around $5 million for the book, roughly $3 million in 2020 and another $2 million in coming years. The same tax records showed that Cuomo donated $500,000 of the proceeds to charity. 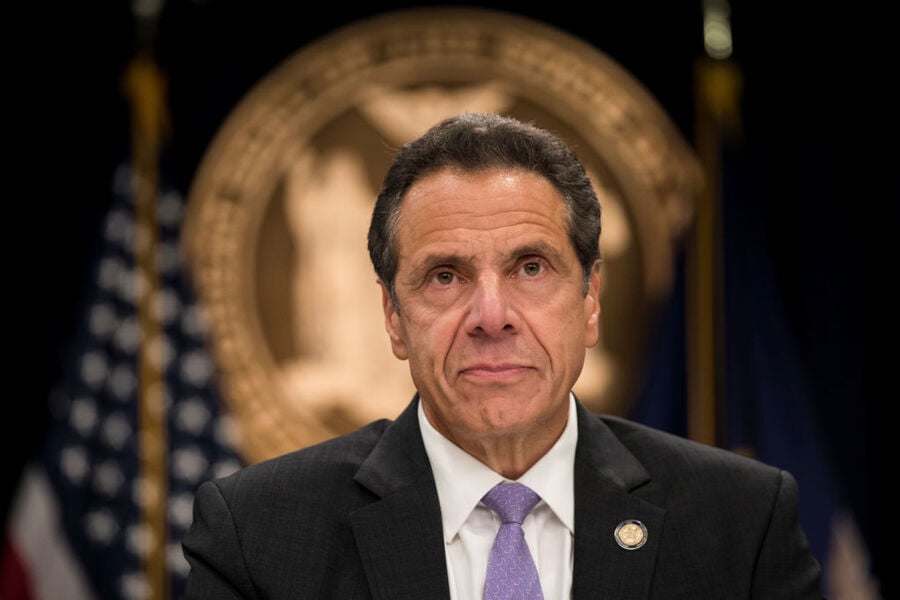 Andrew was previously married to Kerry Kennedy, daughter of Robert F. Kennedy. They married on June 9, 1990. They have three daughters: twins, Cara Ethel Kennedy-Cuomo and Mariah Matilda Kennedy-Cuomo (born 1995), and Michaela Andrea Kennedy-Cuomo (born 1997). They separated in 2003 and divorced in 2005. He began dating Food Network host Sandra Lee in 2005 and the couple moved in together in 2011. The two resided in Westchester County, New York. In September 2019 the couple announced that they had ended their relationship.

On July 4, 2015, Cuomo presided over the wedding ceremony of his long-time friend Billy Joel to his fourth wife, Alexis Roderick.

In March 2020, Cuomo was being interviewed by his brother Chris Cuomo on CNN about the coronavirus outbreak. Andrew discussed New York’s response to the coronavirus outbreak and noted the possibility of implementing a curfew to keep residents inside.”I don’t like the word curfew. Dad tried to have a curfew for me and I never got past the resentment,” Andrew said. Chris replied: That was the least of your problems, your problems with the curfew. Just so you know.” After a back and forth banter, Chris said: “…no matter how hard you’re working, there’s always time to call mom. She wants to hear from you. Just so you know.”

As Governor of New York, Andrew Cuomo earned a salary of $200,000 annually.

On August 10, 2021 Andrew announced he was resigning as Governor in the wake of a sexual harassment scandal that had marred much of the last several months of his tenure. A few weeks earlier, the New York Attorney General released a report that claimed Cuomo sexually harassed multiple women and retaliated against a former employee. He had been facing calls to resign for months. Adding to his problems was a controversy surrounding the public reporting of nursing home deaths during the worst part of New York’s COVID crisis. The Attorney General claimed that Cuomo’s administration under-counted nursing home deaths by 50%.