Nicki Minaj was born Onika Tanya Maraj in Saint James, Trinidad and Tobago on December 8, 1982. She has an older brother and sister and a younger brother and sister. She lived with her grandmother in Saint James as a young child. Minaj’s mother Carol had moved to New York City to attend Monroe College. When Nicki was five, her mother moved the children to Queens, New York. Carol worked in payroll and accounting departments during Minaj’s youth. Minaj’s father was addicted to alcohol and other drugs and had a violent temper. He burnt the family house down in December 1987.

Minaj auditioned for admission to Fiorello H. LaGuardia High School of Music & Art and Performing Arts and was accepted. She wanted to become an actress. After graduating from high school she was cast in the Off-Broadway play “In Case You Forget.” She worked at Red Lobester in the Bronx to supplement her acting income. She was fired for being rude to customers. Minaj went on to be fired from, in her words, “at least 15 jobs,” for being rude.

Minaj was discovered by fellow American rapper, Lil Wayne, and soon after signed a deal with his Young Money Entertainment record label and management firm. Minaj released her first mixtape Playtime Is Over in 2007. She released a number of mixtapes after this, including Sucka Free in 2008. Minaj won the Female Artist of the Year award at the Underground Music Awards in 2008. In 2009 Minaj appeared in XXL magazine and released her third mixtape. Minaj released another mixtape, Beam Me Up Scotty, in 2009. Minaj’s debut album, Pink Friday, was released on the Young Money Entertainment label in 2010, it went on to sell 4 million copies worldwide. She released a second album Pink Friday: Roman Reloaded in April of 2012. That album was eventually certified platinum. Nicki Minaj was also one of the celebrity judges on American Idol during the 2013 season. In December 2014 she released her third studio album, The Pinkprint. To date, that album has sold over 650,000 albums worldwide. In August 2018 Nicki released her fourth studio album, Queen. This album debuted at #2 on the Billboard 200. It was eventually certified Platinum in the United States with sales of 1 million.

In May 2017 Nicki overtook Aretha Franklin’s record for a number of songs on the Hot 100 for a female artist. Aretha’s record stood for more than 40 years. It should be noted, however, that Nicki is a featured artist on many of her tracks whereas Aretha was the sole-credited artist on all 73 of her tracks. Minaj has won more than 100 notable awards including six American Music Awards, 10 BET Awards, four Billboard Music Awards, three MTV Video Music Awards, and two People’s Choice Awards. She has been nominated for 10 Grammy Awards but has not won yet. 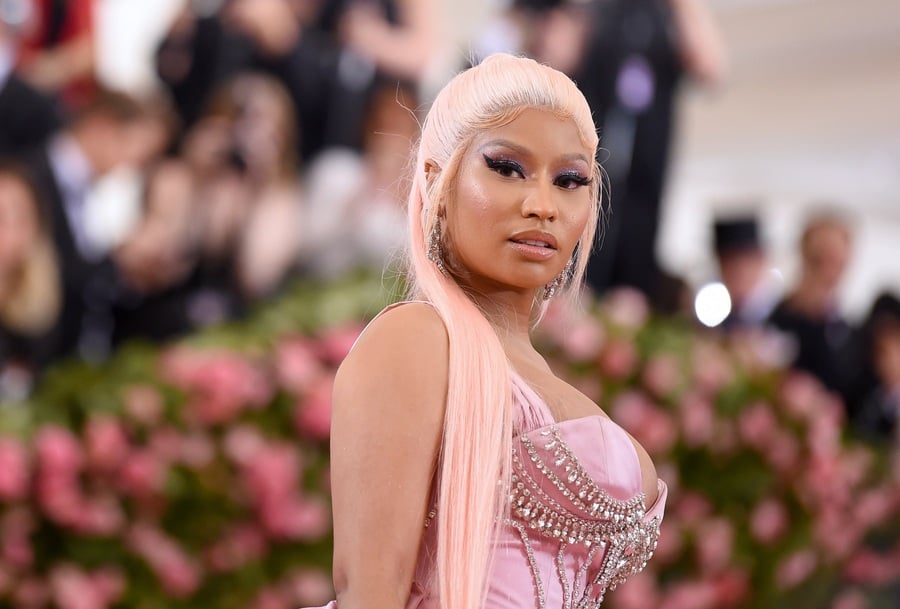 Minaj has endorsed a number of products during her career. Her first collaboration was a November 2010 endorsement deal with MAC Cosmetics for a lipstick, “Pink 4 Friday,” which MAC sold for four consecutive Fridays to promote her album Pink Friday.

In April 2012, Minaj helped launch the Nokia Lumia 900 in Times Square.  The following month, Minaj appeared in television and internet advertisements for Pepsi’s “LiveForNow” campaign, which featured a remix of her single “Moment 4 Life.” She endorsed the 2012 Viva Glam campaign with Ricky Martin, which raised $270 million for the Mac AIDS Fund.

In December 2014, Minaj was announced as the new face of the Roberto Cavalli spring/summer 2015 campaign.

Minaj also has a successful line of fragrances.

In July 2011, her cousin Nicholas Telemaque was murdered near his home in Brooklyn, New York, an incident she references in her songs “Champion” and “All Things Go.”

In February 2017, Nicki’s home was ransacked by burglars who reportedly flipped furniture and threw things all over the house. destroying the inside. They made off with jewelry and other expensive items totaling $200,000.

In November 2017, her brother Jelani was convicted of predatory sexual assault against a child and endangering the welfare of a child. On January 27, 2020, he was sentenced by the Nassau County District Attorney’s Office to 25 years to life.

In August 2016, Nicki Minaj and Meek Mill rented a mansion in Beverly Hills for $35,000 a month. The home was built in 2008 on the site of Frank Sinatra’s former residence. The 10,340 square foot home has panoramic views of the city and mountains. The house features a two-story foyer, a large living room with a fireplace, and arched French doors leading outside. There’s an eat-in kitchen, a wood-lined library with built-ins, a formal dining room, and a family room, as well as eight bedrooms. The outdoor space includes a swimming pool and spa and a barbecue. Once they broke up, Mill moved out and the mansion was all hers until February 2018, when she moved out.